I will admit that the tagline on this week’s feature is a bit bold. In less than a year, the nearly 150 year old historic French Quarter Hotel Monteleone completed it’s most ambitious renovation yet. The transformation features an expanded Carousel Bar and the new restaurant Criollo (Criollo – The Hotel Moneteleone 214 Royal Street New Orleans, LA. 70130 / 504.681.4444).

I was thrilled to have stayed in The Monteleone for several days and take in the history and grandeur of this world renowned New Orleans hotel. I was  also fortunate enough to enjoy what turned out to be the best breakfast I’ve had to do date.

Large windows line the entire dining room to envelope the space with an enormous amount of natural light. The hustle and bustle of Royal Street in the heart of The French Quarter is right there in plain sight. Such an inviting, welcoming and warm space.

What lead me to the bold tagline is right above this paragraph. From the moment my fantastic server made her first steps towards my table with those beignets, my head began to spin. There is no doubt my eyes popped out of their sockets like a Saturday morning cartoon character when they were placed in front of me. While I certainly appreciate the restaurant looking out for overall health by placing some very fresh fruit next to those pillows of goodness, I could have cared less.

I think I drooled on my camera while taking photos of the dish all the while saying to myself “you got it” and “put the camera down”. Within seconds of the images being burned into the memory banks of my memory card, I had already devoured 2 out the not even enough for me beignets. Don’t get me wrong, I dig Cafe Du Monde and Morning Call like the next native, but they have nothing on these. Seriously, we’re talking Death Row meal material here folks.

I chowed hard through the whole order of beignets in the same amount of time it took for Michael Phelps to win his 20th or so gold medal. I pushed and picked at the fruit until the next round of awesomeness showed up. P.S. for the record, I did eat some of the fruit. 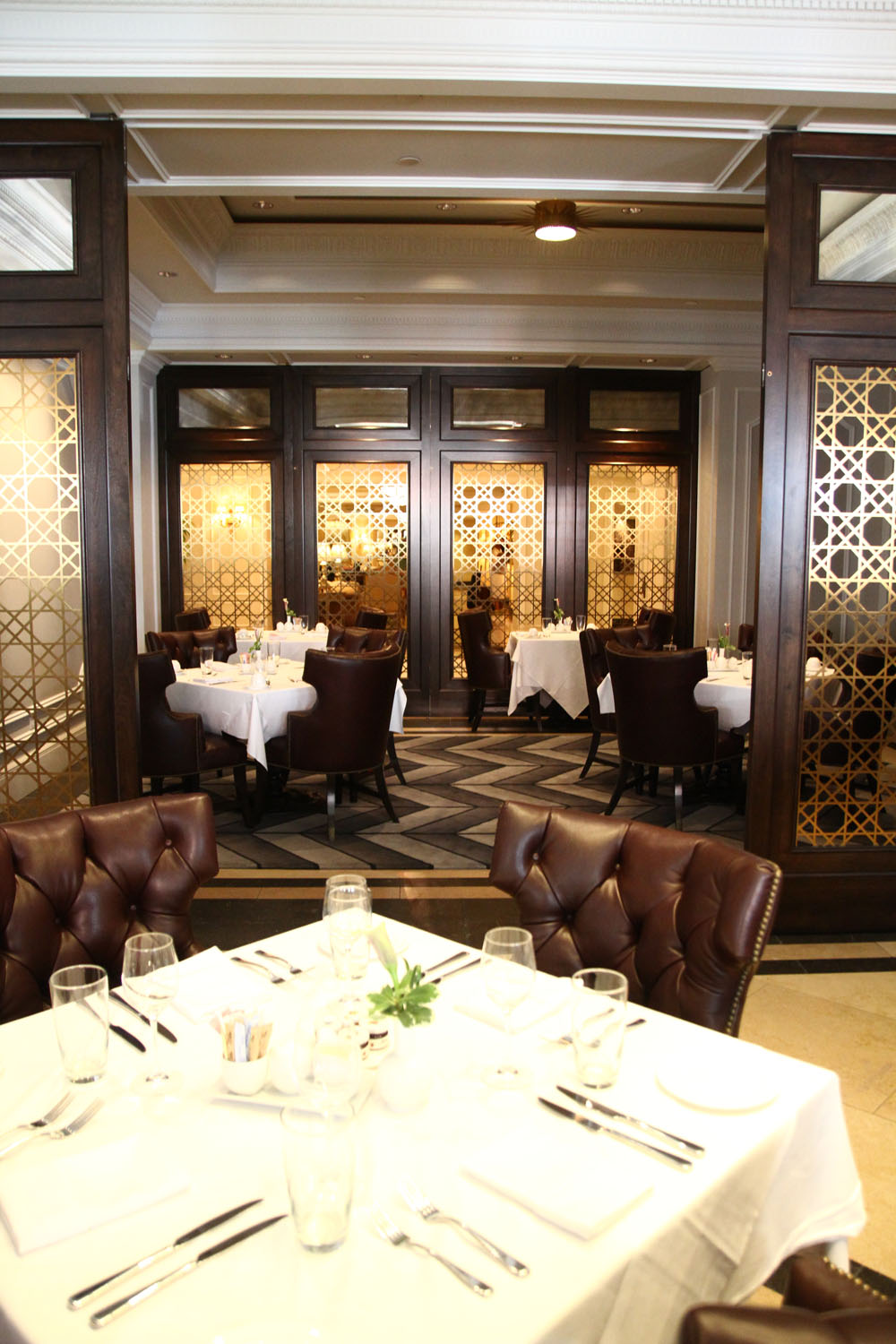 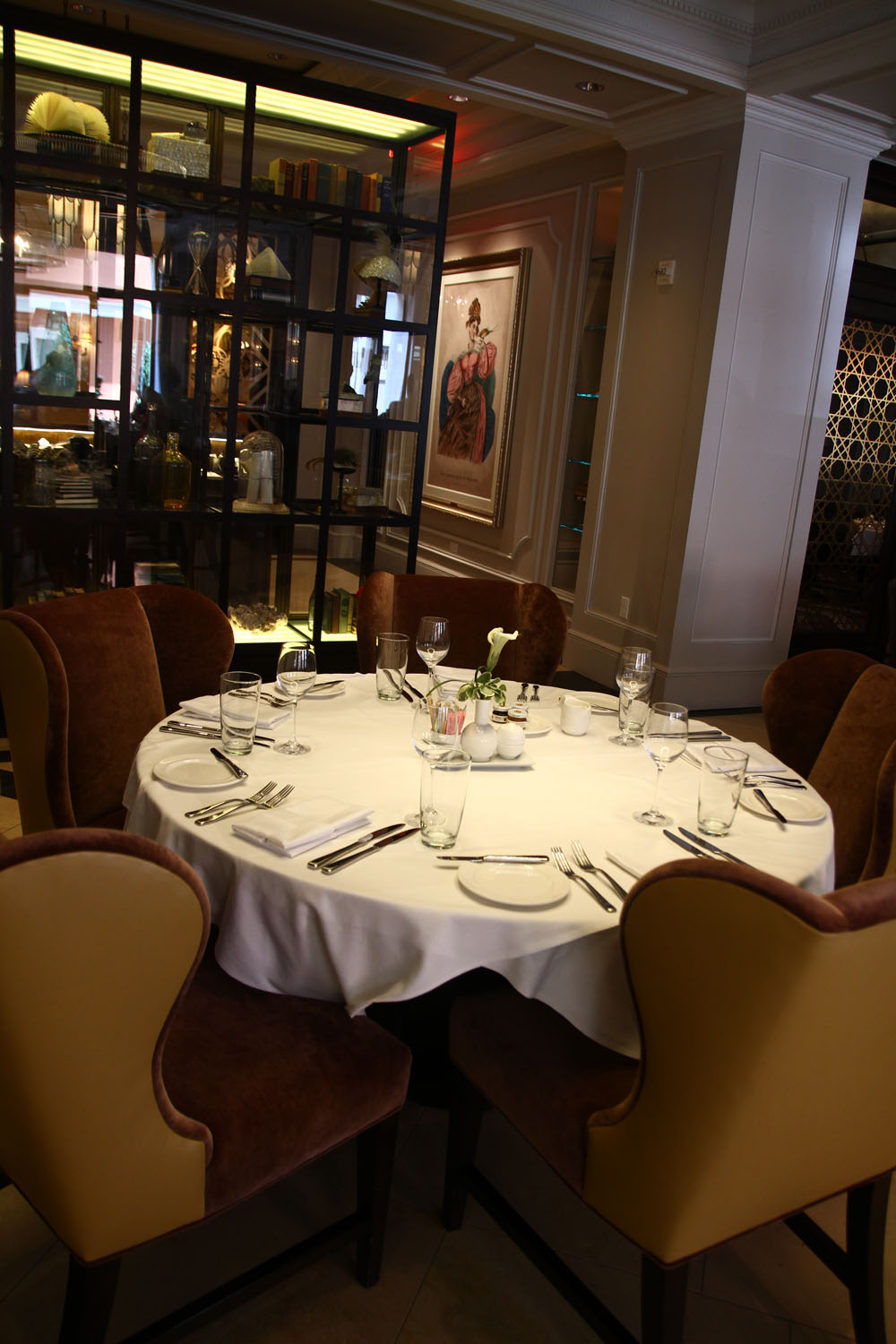 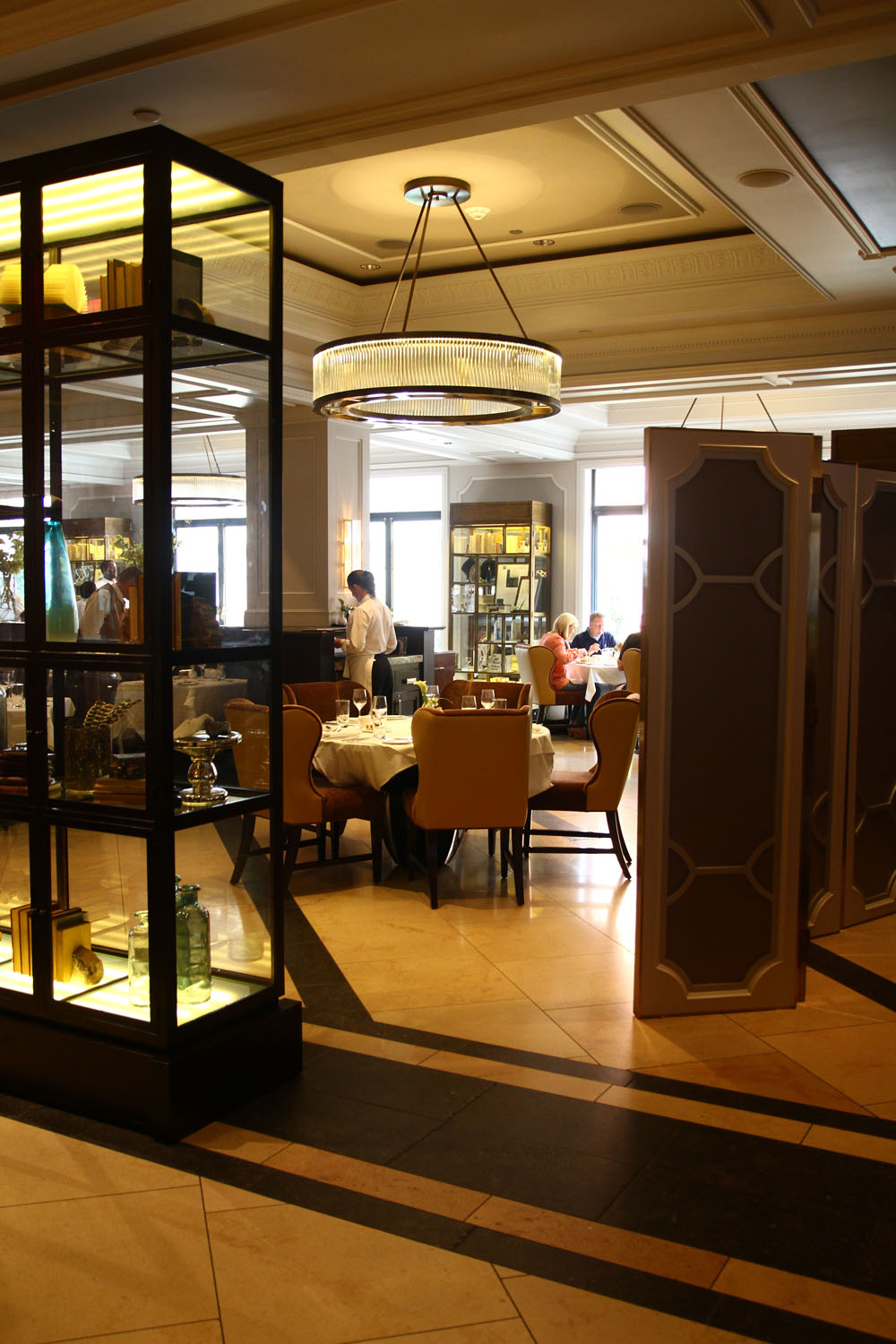 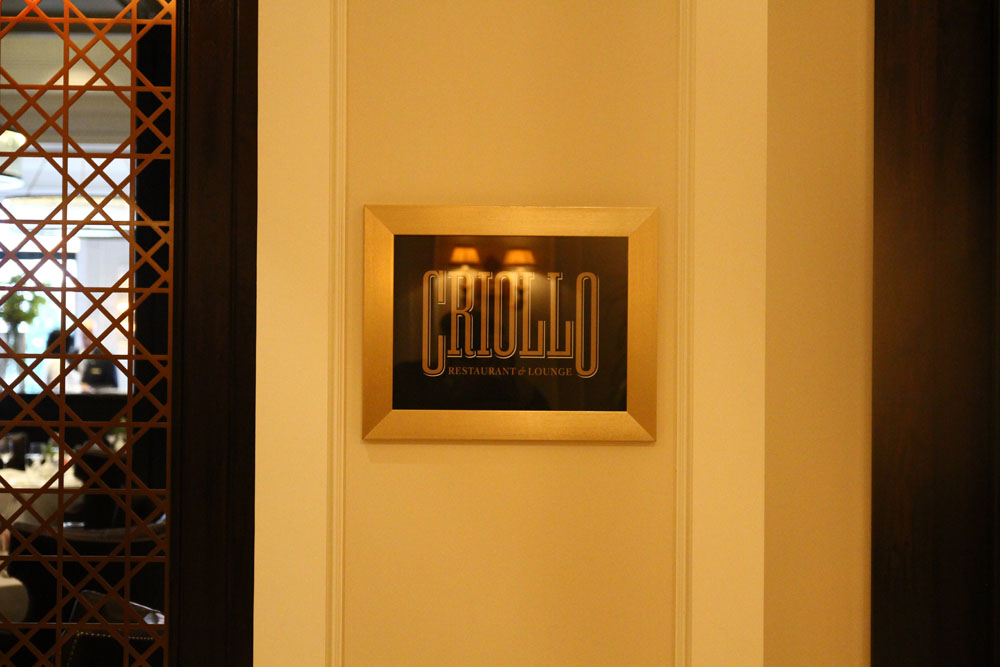 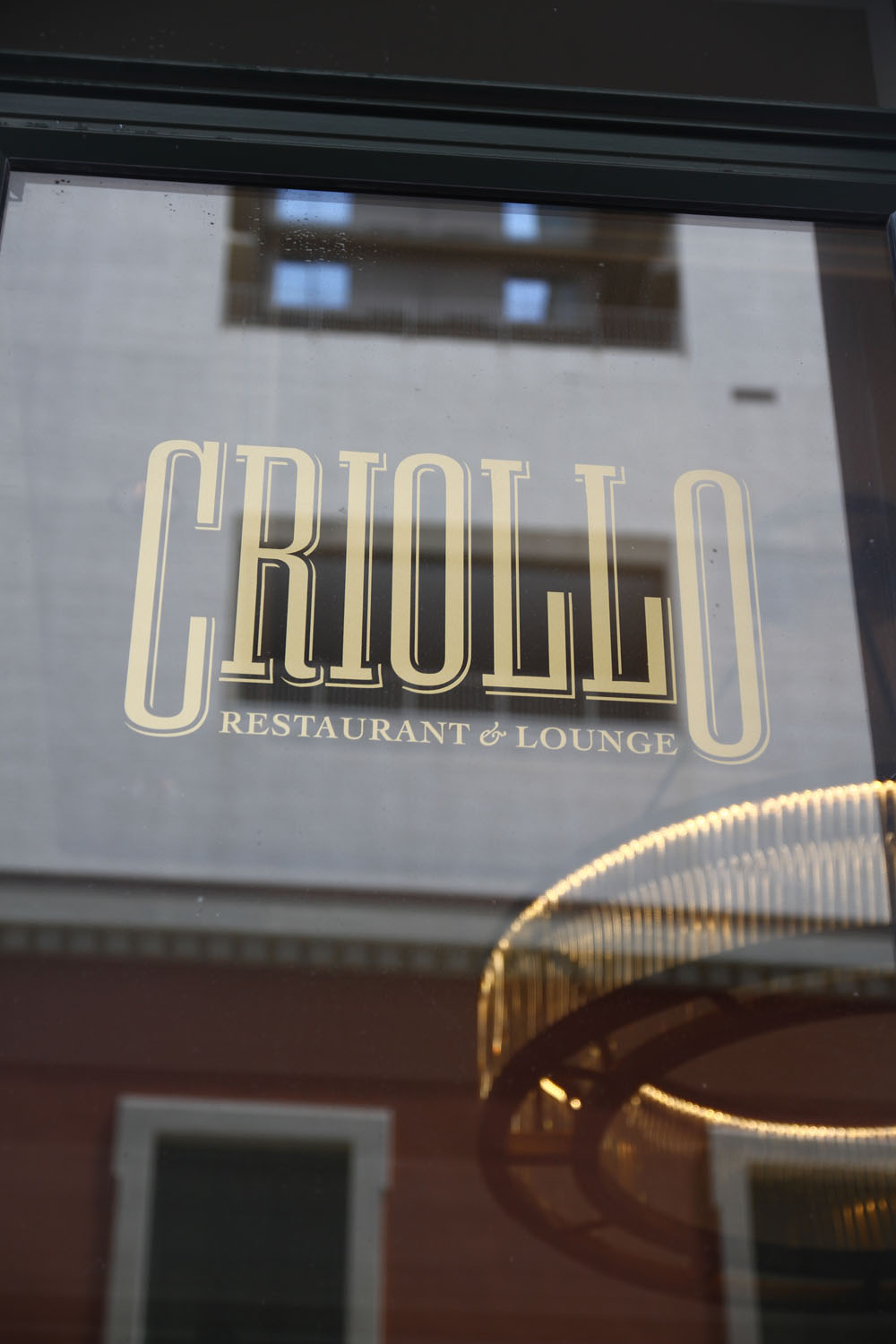 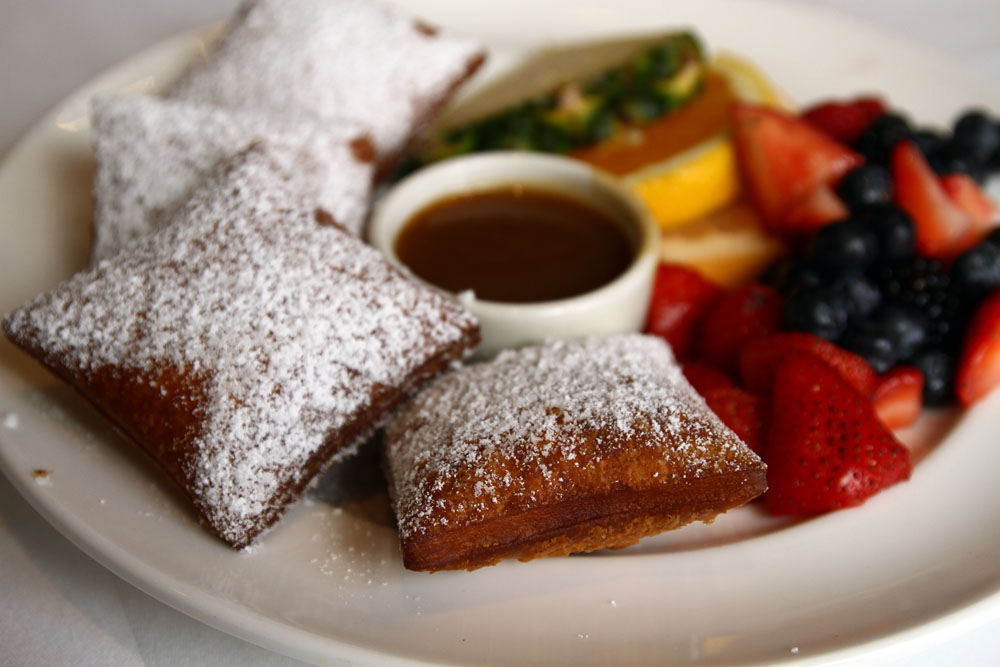 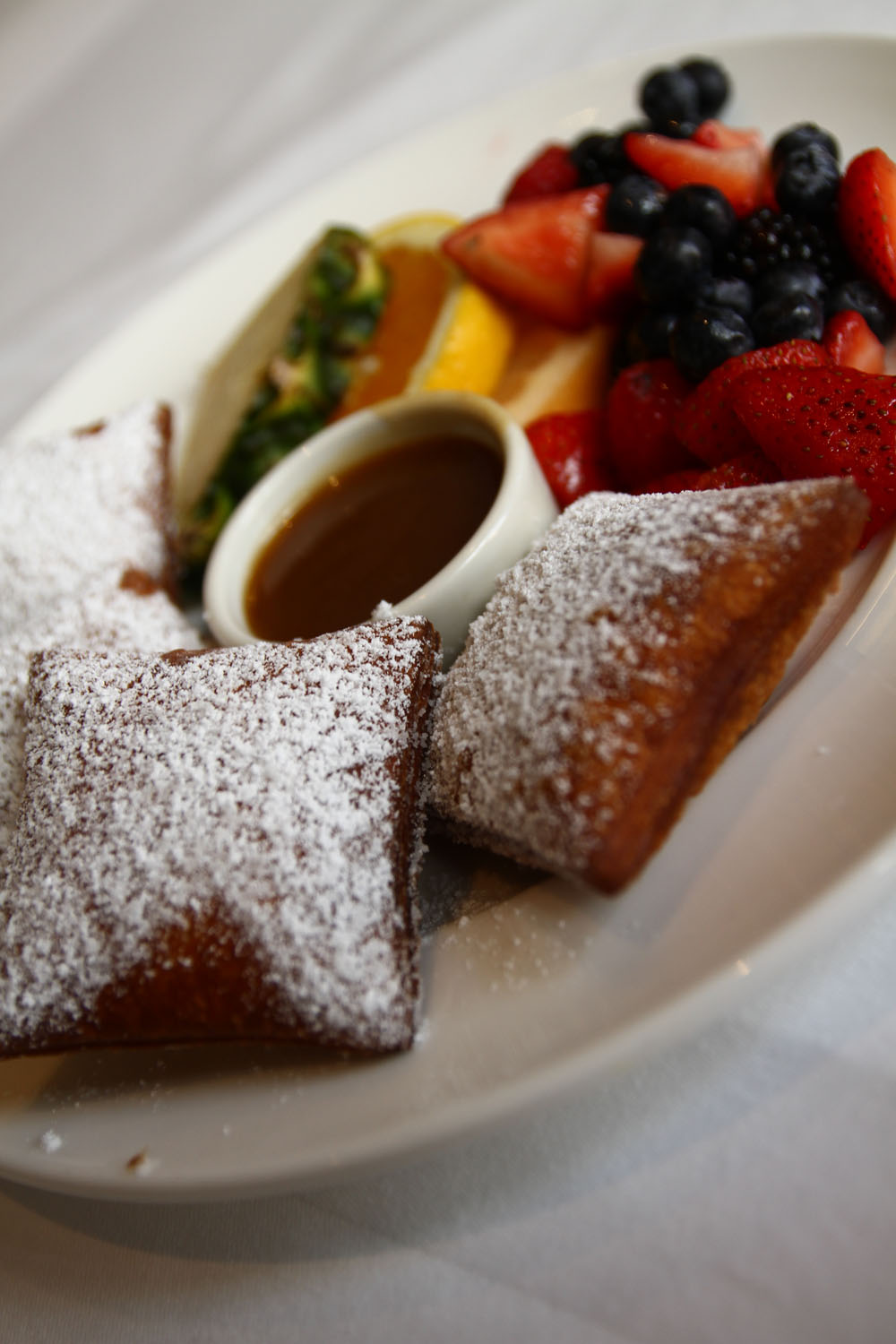 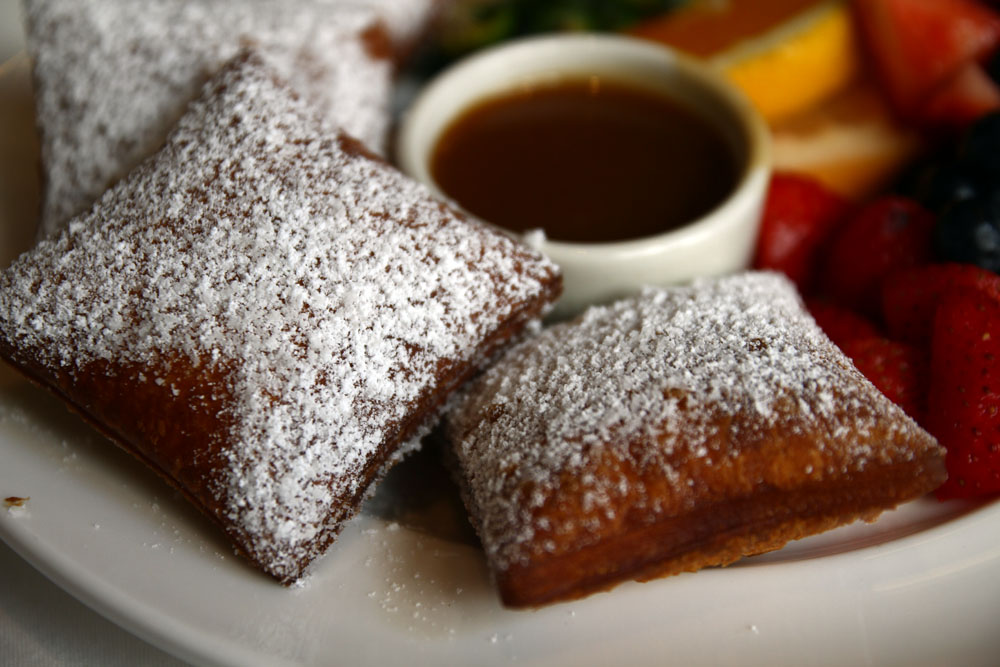 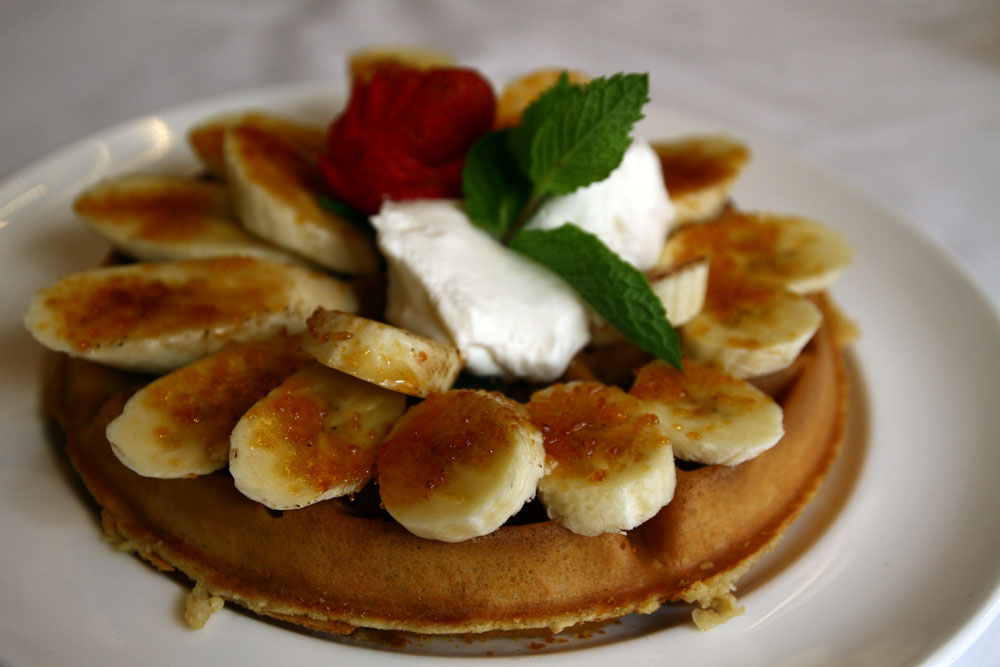 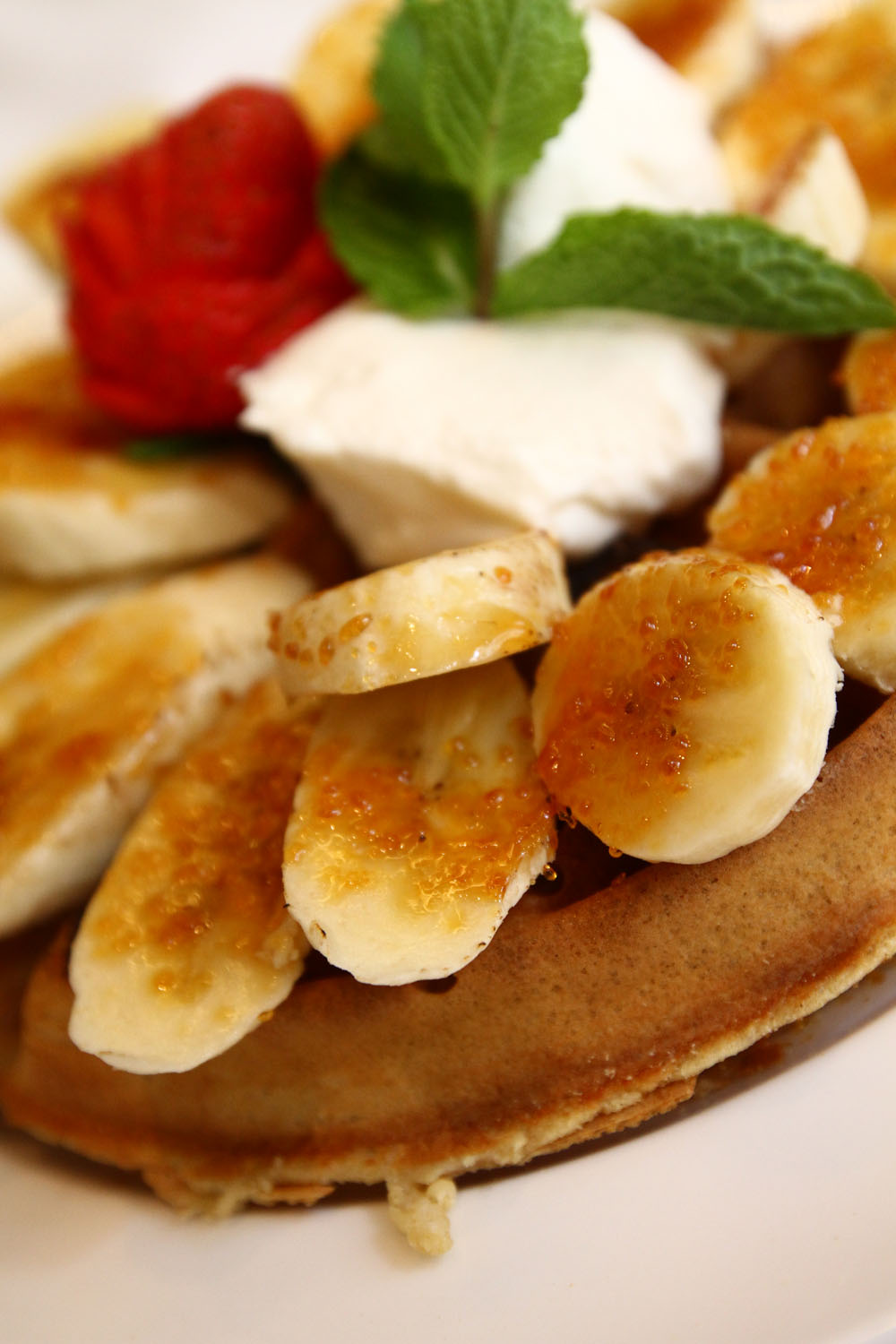 I thought in my mind as course 2 showed up at the table, that it was going to be hard for an omelette to be what I just experienced. I couldn’t be more wrong. The omelette was surrounded by butter and filled to the brim with thick and sultry manchego cheese, fresh tomatoes and of course umm bacon! Again there was fruit only to attempt to make me feel guilty for stabbing into the delicately formed hash round. The cheese, tomato, and butter were playing so perfectly together, but the bacon through me over the moon. Overall the omelette was perfectly fluffy and divine. Running out of room was I.

Finally, my gracious and very astute server, noticed me needing a little more. As she sashayed over, she somehow knew I was going to ask her about the “SPECKLED VANILLA BEAN WAFFLE Banana Brulee”. How could I resist I replied and she went and did her thing. When the dish arrived I knew I had met my match for the day. There was so many burlee’d bananas toppled onto one another I couldn’t even see the fresh off the griddle waffled laying below. Where to start was the question. As I put my fork through the first banana I could here that wonderful crackle of the fired and carmelized sugar. Of course there was whipped cream there to help along the way, but after just a few bites I was done.

I can’t imagine having any other meal before Noon challenge the one above. To be able to sit in such an historic place, along such an historic street, and experience such food madness is hard to come by even in this town. It’s an all around experience that in mind won’t be trumped in quite some time.